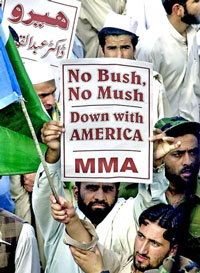 I think there isn’t anyone among the regulars on my blog who’s unaware of my feelings about the Bush imperium and about imperialism in general. I’ve been writing now for years – since September 2001 at least – of the particular danger posed by the United States of America to the world at large, and I’ve repeatedly pointed out the fact that in my own considered opinion the planet, as a living entity, cannot continue to tolerate the existence of the US in its present form.

Does that, however, make me anti-American, as I’m accused, virtually on a daily basis, of being?

What is being anti-American, anyway? Am I against the soil of the ? Am I against grizzly bears, coyotes, and redwoods? Am I supposed to oppose the existence of the Gila Monster or the  (and never mind – just for a moment - the US Rangers there being forbidden to mention its geological origins)?

It’s easy to say, like so many of my interlocutors on Orkut and other websites, that “All Americans are evil,” “all Americans should be killed, “the only good American is a dead American,” and so on. Most of the people who say this are immature and semi-educated, but not all; most of them are Muslim, and of a fundamentalist bent of mind, but not all. I’ve known white Australians with college degrees and of impeccably Christian heritage who refused to even writethe word “” properly.

These people aren’t insincere in their viewpoints. When they say “All Americans are evil” they mean what they say. They’re just not adequately informed. They’re also excellent propaganda copy for the enemy; because don’t imagine the Bush cabal doesn’t know about them, and doesn’t use them as fodder in its “They hate our freedoms” campaign.

Before I go further, let me clearly state my position, so there isn’t any confusion over what I’m saying.

I hate the government of the , its armed forces, its social and economic system, its foreign policy, and its continuing attempts to impose its ownership over the world. There is nothing I would like better than to see all this destroyed.

I do not hate the people of the , its tradition – now imperilled – of free thought and dissent. I do not hate even the most retrogressive, the most hidebound denizen of the Bible Belt, because – unlike the “ to the gallows” crowd – I do know a little of what I am talking about.

Americans have done a hell of a lot of horrible things, and continue to do a lot of horrible things. They – even if nothing else mattered –live so wastefully that if we all did the same, we would need six more Earths just to supply the resources. They do have a government, which they (by common perception) voted to power which is hell bent on turning the rest of the world into slaves. Granted.

The average American is brainwashed systematically from birth to believe that his/her country is the greatest in the world, that the nation’s authority flows from “god”, that the country stands for “good”, that anyone opposing it must be therefore evil, that everyone loves America, and that since America is the centre of the universe nothing else is really worth knowing. The average American is carefully guided into these beliefs by being kept systematically ignorant, especially in these days of “intelligent design” and “teach the controversy”, of science and logical thinking; he or she is force fed TV trash till what is on TV becomes the perceived reality. A nation where museums can exist that posit that humans and dinosaurs co-existed, or where the ’s geological history is suppressed, cannot be considered a nation looking at modernity. A nation where the price of petrol (“gasoline”) becomes the benchmark of foreign policy success cannot be considered a modern society.

So when this American who has never been taught to think for himself, who has been force fed the notion of the infallibility of Genesis, who has been brainwashed into believing that his nation is the greatest on earth and is beloved of all except “evildoers”, is suddenly confronted with the truth, that is, that America is not the most loved nation in the world, but rather the most hated; that the rest of the world does not want to live as American vassals; and that US power is not universally applicable, and that not everyone thinks “god” made the world in six days and rested on the seventh, he is faced with a stupendous intellectual shock.

What then is easier but to delude this wretched individual into the belief that he does not see what he is seeing, but that this is all the result of a conspiracy by “liberals”, “faggots”, “commies” and other traitors? Especially when you control the media, and where these individuals have only the media as their window on the world?

Of course, this American is also likely to be a person of limited economic means, and therefore of limited access to independent information or education, and he is likely to be kept there in that economic bracket. He will be encouraged to buy on credit and not save at all; in his employment, he will be deprived of the right to form effective unions so that he can be kept under further control by not having economic security; and as far as his health is concerned, he will not be able to afford any real care without expensive and often unaffordable insurance. All this will go to keeping him exactly where he is.

He has democracy, sure – he has the right to vote for either the Republicans or the Democrats, between whom one would need an electron microscope to distinguish, and who follow exactly the same policies on virtually every issue one can name, even if they were voted to power to do the exact opposite.

All this is not quite enough, so you also have warrantless arrests, the deliberate fomenting of fear and a siege mentality, the poisonous military industrial complex, the USA Patriot Act and  similar legislation, all designed to keep the population – including our putative American - in a state of permanent and voluntary subjugation.

Does this American, therefore, look like a monster any more? Doesn’t he begin to look like just another victim?

What amazes me, frankly, is that this American, despite all that is going against him, can’t be kept down. You can do your worst, but the American still can’t be fooled all of the time.

When the  dropped more bombs on the inoffensive neutral nation of and napalmed Vietnamese villages, who stormed the streets with slogans like “Hey Hey LBJ, how many kids did you kill today?”

When the  was actively planning the invasion of , which everyone outside the  knew had neither WMDs nor links to Al Qaeda, who – despite it being “unpatriotic” then – came on the streets in their hundreds of thousands to protest the planned invasion even before it happened?

Just, as a piece of perspective for Indians – can you imagine any of us marching on the streets to protest an Indian invasion of , for example, as actually happened in 1987?

Who risked their careers, when they did not have to, to protest the mass murders of Iraqi and Afghan civilians? Who are the Dixie Chicks, Susan Sarandon, Sean Penn? Who are Cindy Sheehan, Eric Blumrich, or our very own Malcolm Mills?

Can you, my fellow Indians, imagine Amitabh Bacchhan or Lata Mangeshkar protesting the murder of Kashmiri civilians by Indian troops?

Who was it that insisted on the individual’s right to oppose governments, even governments at war, and went to jail rather than pay taxes that would go to support an illegal war? Henry David Thoreau, in my own opinion one of the greatest philosophers since Socrates, and he was an American, too.

And another question – yes, the American government and its corporate cronies are vile beyond comprehension. Yes, they would be glad to batten upon us and suck us dry. Yes, they think they own the world. But can they actually,by themselves, impose their will on all of us?

Who the hell do these murderous parasites work through? Isn’t it our own governments, our own “leaders”, who follow their orders and let them in through the door? When farmers commit mass suicide and Manmohan Singh (who came to power promising an independent foreign policy and left of centre economics) parrots economic policies written down for him by the World Bank, when he betrays our old friend Iran by voting – not once by twice – against it in the IAEA in order to please Washington, when he throws our ports and air space open to American military units, what price anti-Americanism? Why don’t we rise up, pull this Quisling out of his office and hang him by his own intestines from the lamp-posts? Until we destroy the compradors and fifth columnists among us, do we have a right to blame it all on ?

Of course it’s easy to do that. Blame the Americans. It’s easy to do for the same reason that it’s easy for the Bushies to claim that anyone who hates the does that because he “hates their freedoms”.

Ignorance and chauvinism make the worst of all combinations.
Posted by Bill the Butcher at 05:35