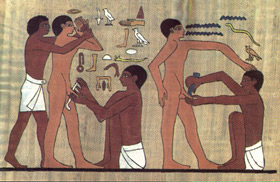 Has anyone  read Alex Hailey's Roots? The part where the protagonist, Kairaba Kunta Kinte, is told that as part of his manhood training, part of his fotowould be cut off? And then the author goes on to describe how it was done. (Whether the book was plagiarised, as claimed here, is not germane to the current discussion.)
I am among the few non-Muslims in India who are circumcised (Jews in India are too few even to signify).
It was because I had this problem called phimosis. It happens when the foreskin is so tight that when it rolls back over the glans (as is normal during sex or during an erection) it can't come back again. It's not uncommon, but because the majority of the world's population is circumcised (West Africa, for example, has seen circumcision practised for many thousands of years, as has Egypt - check the illustration, dating from 2300 BCE), and we in the uncircumcised part of the world do not talk of such things, it's not much known. I had this problem. It first manifested when I was 16, when I woke up one morning with the foreskin retracted behind the glans, which was swollen and huge because of the blood accumulated behind the constricting band of skin. I had no idea what it was that had happened. I was terrified and mortified. And also because I had no communication with my parents on such issues, I did not mention it to them. I could barely walk. But I still went to school somehow, and walked back (three kilometres either way). By the next day it was worse than ever and I forced my dad to take me to a doctor who pulled the foreskin back, agonisingly, without anaesthesia (later as a medical student I discovered anaesthesia ismandatory for this procedure). The swelling went down very fast. This doctor said I should come back after a few days for a circumcision. Also no one had ever told me to wash the glans of the penis with soap and water to remove the smegma deposits (which can incubate yeast infection and also cause cancer). After a few days the problem recurred (I woke up and pulled the foreskin back just in time) and when I went back to this doctor he said there was no need for circumcision and it would be "OK when you are married(?)" Another medical myth there. Anyway, my dad went "Why did you never wash it?" I answered: "Did you ever tell me to? How the hell would I know about it if you don't tell me?" Remember what I said about parents being responsible for their children’s sex education?
Later I kept on having problems like this. I got to being phobic about sleep because I used to get terrified lest I get an erection during dreams and get the foreskin stuck again. Also on at least two occasions I stopped at crucial points with girls because I got terrified of getting the foreskin stuck (once it did, too, but after a long time I got it back again.) Of course the girls involved were unhappy and I never had that chance with them again.
Ultimately I got a reluctant ("Why do you want it at all?") surgeon to remove my foreskin in June 2000. I'm convinced it's among the best moves in my life. It caused a hell of a lot of trouble for a month or more, sheer undiluted hell, but afterwards I have been able to have sex and also to sleep again.
(Oh - I just want to make clear that when I say "circumcision", I meanmale circumcision, not the condemnable female variety, in case anyone has a doubt.)
But, my personal choice, in the Indian scenario, to be circumcised, is not exactly a free choice anyone can follow. A dear friend writes about how she got her grandsons circumcised so they would not be teased because they look different, in locker rooms and so on. In India it’s not a matter of teasing – whether one is circumcised or not may make a difference between life and death. Quite literally. Because, during our periodic bouts of religious mayhem, it’s not unknown for men to be stopped and stripped by religious gangs and killed, or released, on the basis of their being circumcised or not (all circumcised individuals automatically being Muslim in the eyes of both Muslims and Hindus). And also when the World Health Organisation recently released areport saying that circumcision halts the spread of HIV, Indian health officials said in private that they could not possibly agree to the report, whatever the truth of it, because they would be promptly accused of trying to spread Islam. As though HIV cares about the religion of the person it is infecting.
Compared to all this, the issue of a boy’s locker room embarrassment looks, frankly, not very overwhelming.
But as long as he gets circumcised, it’s better than nothing. Of course I am not suggesting that we should stretch out our kids on the ground and take unsterilised bronze knives to their foreskins...
But even that might just be better than nothing.


According to a web-site I came across, circumcision decreases penile sensitivity up to four times - and this is an allegedly scientific article from softpedia.
Now, you'll agree, the proof of the pudding is in the eating.
I'm circumcised. I got circumcised due to phimosis that had made me virtually impotent and at a relatively advanced age. And in my opinion it's the best thing that ever happened to me, for reasons that I have discussed here.
As for sensitivity, after circumcision there is a drop in sensitivity - this is true, and is necessary because there is such extreme sensitivity after circumcision with the naked glans rubbing on underclothing that walking is a torture for up to a month. But the drop in sensitivity is a temporary phenomenon. During sex the glans is engorged and hypersensitive and of course vaginal secretions and lubricants make sure the glans isn't dry. So the theory that a dry glans is desensitised is false.
In the days when I was uncircumcised I was still a virgin (I had several opportunities to have sex but couldn't do it because of my phimosis - I was deeply phobic even of sleeping and getting an erection that could potentially trap my foreskin behind my glans, causing massive swelling and incredible pain, forget about sex). All my orgasms were from masturbation, so the only field of comparison open to me is masturbation. In those days I could stretch a masturbation session to last up to ten or fifteen minutes if I wanted. Or if I were in a hurry I could do it in two minutes or so. Till today I can do the same. How long it lasts depends on my mood, my state of arousal, how slow I take it and the time available. When I was uncircumcised my orgasms during masturbation were intense. After circumcision the intensity dropped drastically but the nerve endings adjusted and within a year of circumcision my orgasms were as intense as they always were. So, again, I do not think circumcision ruins sensitivity.
Also, according to WHO, circumcision allows a drop in HIV infection rates up to 60%. This is the result of a scientific study. The softpedia article makes claims but makes no attempt to provide any proof.
I must say this though - circumcision is awfully painful. Not the actual procedure, which is under local anaesthesia. I mean the aftermath. The first month is hell on earth. First the penis rubbing on the clothes, and after that intense itching from the healing skin as it dries. And you can't even scratch. I remember going around the house doing chores the day after being circumcised and suddenly noticing drops of blood trailing behind me...
Yes, I think circumcision is good. No, I don't think one should wait till adulthood to get it done. I should hate anyone else to go through what I went through. And, no, I don't think circumcision is part of some kind of vast conspiracy to decrease male sexual pleasure, either.
So when I read articles like the one above, and also relate them to the articles (more in the nature of adverts, really) promoting foreskin reconstruction surgery, I seem to smell a rat in the works.
Like so many other procedures, it seems to be a case of inventing a problem in order to cure it.