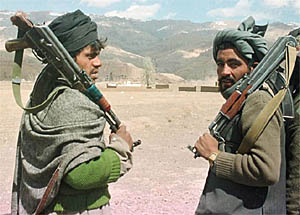 With enemies like George W. Bush, who needs friends?
Cut to , 2001. Approximately 90% or more of the country was under Taliban control. Just pockets in the extreme north and the Panjshir valley were still with the warlords of the northern , but these areas had held out so long that they were virtually impregnable.
In the Taliban-controlled south, however, things were not exactly great. The Taliban were under extreme economic pressure due to the mass sanctions against them. Drought ravaged the land. All the fantasies about Unocal-approved gas pipelines from  had been abandoned because the Americans no longer backed the Taliban as they had in the early days. And, where the Taliban had managed to earn substantial amounts from the sale of poppy products (opium, morphine and heroin) earlier, Mullah Omar had banned poppy growth and the Taliban had almost eradicated it. Yeah – there are some positive things to being an absolute ruler. You can get some things done.
Now, while in the earlier years the people had supported the Taliban simply because they needed security against the murderous and criminal Mujahideen “rulers”, once the security had been provided they needed something else. Once people can live free of the fear of being robbed, raped, or shot if they walked down to the corner shop, they begin to ask for more. Even if you’re a pure Islamic holy warrior host who won’t allow polluting things like culture, you still have to provide food, clothing and shelter for the population, and employment, and education, and other intangibles like satisfaction with life. Right?
It would be difficult for anyone, given the circumstances. For the Taliban, it was an impossibility. Jehadis are piss-poor rulers. Revolutions are all very fine when you’re fighting Western cultural pollution and Mujahideen bandits, but after a time, when all the women are in burqas and all the men have fist length beards, you have to begin filling their bellies and curing their illnesses. The Taliban might have got somewhere had they had something in the way of ruling talent, but they danced to the tune of Mullah Omar, a financial genius of such proportions that he kept the entire national treasury in two tin trunks under his bed in Kandahar. One trunk was full of Afghanis, the other of US dollars (vide Ahmed Rashid, Taliban: The Story of the Afghan Warlords). Some whiz-kid, yes. And while we’re about it remember that Islam already outlaws such things as lending money for interest and so on.
So, it isn’t too surprising that by 2001 the Taliban were creaking and nearing collapse. I’m sure that if they didn’t have the residual civil war to keep them glued together, they would have fallen apart then. As it was, the relative moderates among the Taliban were not exactly happy with Omar’s policies. They didn’t like the Arabs of Osama bin Laden, whom they considered unwelcome foreign interlopers and a millstone round their neck. They wanted engagement with the world, not confrontation. They even, to this end, tried to signal to the  that they would be ready for bin Laden to be conveniently “grabbed” – but the  refused to act.
Then what happened? 11/9, or, as the Americans put it, 9/11. NATO invaded , and with the help of the , “toppled” the Taliban. It wasn’t all that much of a “toppling”, the Taliban put up remarkably little fight, melting away into the tribal areas and waiting for the occupation to make a mess of things. Which it obligingly and promptly did, including indiscriminately bombing civilians, handing the nation back to warlords, and moving on to the invasion of , leaving the Taliban structure intact to fight another day.
And, therefore, today, outside the confines of , the Taliban have built right back up again, repositioned themselves as "nationalists", and the people, who hate and fear the occupation forces with excellent reason, are turning again to the Taliban as their saviours. There are excellent reasons to think the Taliban will be back in  in some form in the not too distant future, perhaps as part of a “national unity” government, but back, yes, and more radicalised than ever. That’s what you get by gratuitously attacking an enemy which was about to implode anyway.
I’m not saying Bush was deliberately setting out to help the Taliban…but he couldn’t have done any better if he had.

Difficult as it is to believe...


...Bush and NATO have made such a mess of Afghanistan that thewomen now want the Taliban back.

Here is what one had to say:

"I think life under the Taliban was very good," said Maria Farah, a mother of five. "If we did not have a full stomach, we could at least get some food and go to sleep, and if we went out somewhere there were no problems. How about now? If we go out, we don't know if we will arrive home or not. If there is an explosion and the Americans are passing, they will just open fire on everyone. The security problems are too much here."

I've said it before and I'll say it again; the way to make a rabble of medieval obscurantists and murderous goons look like saviours is to "liberate" the people from them, Bush-style. Be it in Somalia and Afghanistan.

How much longer before, defeated in Iraq and isolated elsewhere, America retreats, its colonies decide the game's no longer worth the candle and withdraw, and a triumphant Taliban re-enter Kabul with a cheering populace throwing flowers before their pick-up truck wheels?
Posted by Bill the Butcher at 06:34

Email ThisBlogThis!Share to TwitterShare to FacebookShare to Pinterest
Labels: imperialism