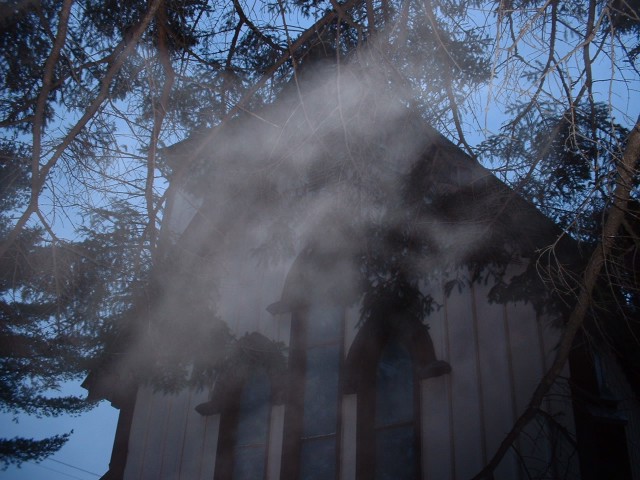 Of ghoulies and of ghosties
Of longlegettie beasties
Of things that go bump in the night
Good lord deliver us.          (Author - unknown)

Let me outline a hypothetical situation.

You’re walking along a lonely road in the last of the twilight. Dark clouds hang low in the sky. Long shadows hang across the road as trees hang their foliage threateningly overhead. Off in the distance you hear an owl hoot. A shiver passes down your spine. You feel as if, as the saying goes, “someone walked across your grave.”

Darkness falls, and you suddenly know – you know, for a certainty – that Something is following you, walking in your footsteps, and you are akin to that character alluded to by Coleridge’s Ancient Mariner,

Like one that on a lonesome road
Doth walk in fear and dread,
And having once turned round walks on,
And turns no more his head;
Because he knows a frightful fiend
Doth close behind him tread.

So – somehow, heart thudding, trying not to run for fear that you will be promptly chased down – you finally stumble to your destination, still safe. And when you get there, you learn – not to your surprise – that someone had hanged himself from the boughs of one of those trees under which you passed. You think you are “fey”. You knew.

You are in a lonely house that once held a loved one. You have stayed often enough in this room and heard her singing softly to herself in the next, you have stood at this doorway and watched her in the moonlight, twirling barefoot on the grass, arms raised, dancing. But she is dead now. And you – you are back here, and you sit in the dim light, reliving memories, and suddenly, you can hear her singing, and when you go to the window, you can see her pirouetting in the lawn – or is that a patch of moonlit mist Surely not! There she is, singing…!

Now, you are walking that same damned road in brilliant sunshine, and you don’t know that someone committed suicide from a tree, and nothing happens to chase you, even if the road is just as lonely. You are in that same house, but you don’t know that someone who used to sing and dance in the moonlight lived and died there, and when you see something in the moonlight, shimmering, it’s just a patch of mist.

Of course it is.

In one of his books, the late Carl Sagan gave the example of a night when he woke convinced a loved one had just died. He said he was so terrified of his idea coming true that he did not even dare get up to phone the person in order to make sure he or she was OK, for fear that he or she would trip over something trying to get to the phone and be killed, thus making it a self-fulfilling prophecy.

As Sagan pointed out, had something actually happened to that person that night (nothing did, of course) one would have a difficult time persuading him that it was all a coincidence that he had a “premonition” of that person’s death.

See here – at some time or other, virtually all of us have this sensation of knowing or feeling things beyond the visible surroundings or what we can perceive through our senses. It’s happened to me as well. Since the origin of this – like déjà vu – is most likely momentary synaptic linkages failing in the brain, it’s not exactly astonishing that it happens to everyone sooner or later. Also, if you’re imaginative, it happens more to you. But naturally.

So, if each of us has this sort of thing, and some of us have them at regular intervals, how come that this gets treated as some sort of message from beyond the shades?

While there is no single answer to this, I believe that it can be broken down basically into a few definite heads:

First, the will to believe. As believers in the Loch Ness Monster and Bigfoot prove, people will believe anything, and believe it, and believe it. You can go and prove it ain’t so (check out the Shroud of Turin) and they will still believe. I think it’s a way of trying to cope with the harsh realities of day-to-day life. After all, it makes things slightly easier if you can think that all this is just a sort of film set on which you’re an actor and great and slow forces are either directing your existence or just on the other side of a thin membrane. Not to speak of the hope that the dead can communicate and return.

Then, the fact that humans tend only to remember successes. Suppose you have two hundred episodes of feeling someone “watching you” (a feeling that may be a relic of our distant ancestry and which may once have had survival value, serving to keep us alert). Well, suppose in one of those cases, by the merest coincidence, you actually discover someone watching you. Will you remember the 199 failures? Of course not. You get my drift.

Also, it dovetails into religion. I have a hard time trying not to laugh when I hear (especially) Christians raving against superstitions or condemning Harry Potter because it “promotes witchcraft”. Personally, I don’t see how casting spells in the hope of something happening is all that different from genuflecting before a cross in the hope of something happening. It seems to me that a religious background or upbringing makes people more likely than not to believe in this sort of stuff.

Then, of course, commercialism. This is the age where anything and everything is for sale, where Dracula’s Castle is a tourist attraction, where “haunted houses” draw tour parties, where “mystic spoon benders” like the “Israeli” Uri Geller trot out their stuff for a hefty fee, where Charles Berlitz makes a fortune writing about the wholly nonexistent Bermuda Triangle. A belief in the paranormal is a positive gold mine for someone willing to make money from it. I’d include stuff like Reiki and Feng Shui in this – after all, how come the people who are “experts” in all that aren’t healthy, wealthy and wise beyond all human possibilities if they hold the keys to everything?

I don’t pretend that there may not be things we haven’t found out, ESP and all included, but these undiscovered things, if and when they are dragged out in the light, will have to conform to laws – laws of nature that cannot contradict what we know now, because if they did our rational understanding of the world would fail, the experimental evidence we have now simply could not exist. If you have ghosts, they must conform to electromagnetic laws.

In the meantime, if you feel something walking behind you, it’s just your imagination. Turn back and look if you don’t believe me.

Email ThisBlogThis!Share to TwitterShare to FacebookShare to Pinterest
Labels: superstition