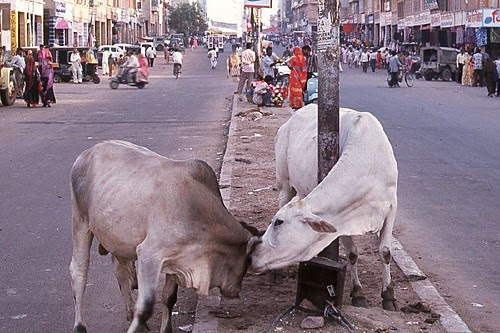 Apart from the human being the one large animal I truly, absolutely hate is the cow.

OK, this probably requires some kind of explanation.

Most of you will be aware that in most (but far from all) Indian cities, cows have free rein of the streets, go where they want and do what they do. They drop dung. They enter gardens. They steal from garbage dumps. They attack people and kill a substantial number every year.

I don’t recall the exact number of instances I’ve been attacked by cows in the street, but I do remember some occasions…

On one, I was riding beside the driver in the front seat of an autorickshaw when a cow rammed the vehicle just next to my arm. Literally a centimetre more and my arm would have been matchwood.

On another, I was in the railway station in  and walking past a large bovine when it turned its head and quite gratuitously slammed its horn into my hand. This was just before I was about to leave for home and I spent the next two days on the journey with a hand swollen to twice its usual size, agonisingly painful, not knowing if it was broken, unable to get any medical attention.

Yet another time – last October – I was walking past a cow on a street when it suddenly came charging at me and knocked me halfway across the street. I was immensely fortunate that this was relatively late in the evening and there was no traffic, or I could have easily been run over.

Cows on the street are a menace. I don’t know how many people are killed every day over the country because of them, but the number must be fairly substantial. I always feel amused when I hear someone fulminating of the alleged danger from stray dogs (which in fact have never even snarled at me, personally speaking, in all the years of my life) while stoutly defending the right of cows to colonise the streets.

Oh – the courts have ordered the removal of cows many times; but this has achieved absolutely nothing, because the people ordered to remove the cows never actually implement the orders unless the judiciary stands over them with a metaphorical whip – and even then the cows are quietly released and back on the streets in days if not in hours.

As I told Mike some time ago, I would support any measure, including the mass use of machine guns, to get these animals off the streets.

It’s not as if these cows are healthy and content on the streets either. They are a diseased, starving, scrofulous lot which, whipped away from fruit stalls or gardens, deprived of any semblance of fodder, meet grisly ends with intestinal canals stuffed full of polythene sheets from garbage dumps or knocked down by speeding vehicles – but as long as nobody kills them deliberately, it’s all right as far as the religious Hindu is concerned.

I guess it’s time I laid a myth here: that the cow is an animal that the Hindu worships and will not eat. Actually, historically speaking, beef was regularly eaten by Hindus and the cow was a major sacrificial animal. But, the early Hindus being pastoral people, the value of the cow in terms of milk and dung began to outweigh its value in terms of meat, so – in order to protect the number of cows from diminishing – a tradition was quite deliberately fomented of cow protection, which in time has become (if you will pardon the pun) a holy cow.

Today, cow protection, to the Hindu Right, is a political issue, on which people can be roused to fury against cow-eaters like Christians and Muslims and certain Hindu castes; the cow itself, of course, is completely forgotten in this.

The usual reason given for banning cow slaughter is the alleged religious sentiments of the people – a wholly spurious sentiment, but carefully fostered to the extent of rewriting history to stop all mention of Hindu consumption of beef. The other reason is the “preservation of the nation’s cattle wealth” – when I hear that one, I want to laugh my ass off. It sounds just like some Masai tribesman counting his cattle and translating them into riches and power. The scrub cow on the street can – with difficulty – perhaps produce a cup of milk a day. It’s not the source of the milk the nation allegedly needs – that comes (in the case of organised farms) from Friesian and other dairy breed cows, carefully cared for, that never see the streets; and in the unorganised sector, from the immensely large numbers of buffalos, which are not let out on the streets except during herding from one place to another. Buffalos, as I can personally attest (I have been trapped in the middle of a herd) are, in spite of their size and strength, gentle beasts with no aggressive intent at all; and they are eaten all right by the cattle worshipping Hindu, even in the middle of the North Indian cow-belt, and sacrificed by the Nepali ultra-Hindu at the festival of Dussehra (The Hindu fanatics who condemn Muslims for butchering camels at Id never seem to be concerned at buffalo slaughter at Dussehra). Go figure.

I live in a state in the East of the country; and the East, whatever its other faults, has the singular advantage of being religiously diverse and of affording minorities their space. In states like this one with a Christian majority, cow slaughter cannot possibly be banned because the people depend on beef for a very large portion of their protein needs and even the Hindu Right recognises that if they tried to ban cow slaughter here, they would lose even the small number of votes they get.

Therefore, there are no cows wandering the streets of this town; if they did, they would be removed and eaten, and a good thing too, good for everyone;

Anyway, as I said somewhere before, over the years I’ve become more or less a vegetarian by choice (though I have no sympathy at all for theprofessional vegetarian – something I mentioned in one of my early blogs here). But I do eat meat once in a while and the only meat I eat by choice (when I get the urge on me) is beef. It’s cheap; it’s readily available; and unlike eating any other animal, when I eat beef I’m gaining some kind of revenge on the cow (OK, go ahead and laugh, but it’s true). I did it today, too. It’s the first meat I ate in months. Went down fine.