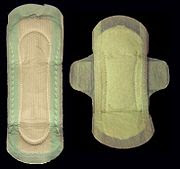 Continuing the train of thought about menstruation I started in an earlier post...

A friend, who is a teacher, once mentioned the plight of one of her pupils. This little girl – who had never been told about menses in her life by her parents, had never even heard a word about it, who was therefore totally unprepared – one day arrived at menarche in the middle of class. Can you imagine the mental state she must have been in, to suddenly find herself sitting in a pool of blood? More than that, in a pool of blood issuing from her vagina, the organ that she was probably told was “dirty” and must never even be mentioned?

What that little girl did was begin crying inconsolably and refuse to get up (she was embarrassed at the blood) – and my friend had to pick her up and console her and telephone the parents to come and get her from school.

Although the little girl I mentioned was an Arab, the situation is something that is absolutely typical of . South Asians – as I’ve said so many times in this blog most of you must be heartily sick of it by now – have in recent centuries turned themselves into a people so sexually repressed that they have even banished all mention of sexual hygiene and health from their own families and from their own children. I don’t know how many sets of parents in India prepare their daughters for menarche by telling them in advance – well in advance – what is going to happen. I’d be surprised if more than two or three in a hundred do. Some of them don’t ever plan to say anything at all, trusting to the usual Indian dictum of “we didn’t need to know, nobody told us, so why should we tell her?” Most of the rest simply keep putting it off. They will tell her “when necessary”, and of course the girl begins her periods while the parents are still fantasising that it’s too early to tell her anything. Nowadays with improving nutrition levels, girls more often than not, for dog’s sake, reach menarche by the age of eight or nine. My cousin, for instance, was told about menstruation by her mother only after the event…by which time it was already kind of too late.

It’s absolutely in accord with the Indian parent’s attitude towards sex. They will not only demand a ban on sex education in school but will never, ever, mention it within their own families, not to their own children. And then the children will grow up unhappy and confused about their own changing bodies and attraction towards the opposite sex and full of notions like kissing causes pregnancy (while sexual intercourse doesn’t) or that penis size matters.  Hell – they don’t even know which opening babies come out from. (My parents, I remember, allowed me to think babies came out through the navel till my grandmother disabused me of that notion.) And, of course, they don’t even have the faintest notion of contraception or sexually transmitted disease. Just contrast this to the fact that these same parents will begin teaching their young daughters cooking and sewing from an early age, preparing them for marriage. They will prepare them for every aspect of marriage – the really important stuff, how to be properly deferential to one’s in-laws, for instance – but not about sex and stuff like that, motherhood and suchlike. The girl is supposed to just “know”.

So these young girls and boys, totally ignorant about their own bodies, full of surging hormones and with no idea what their feelings mean, are thrust  into a situation where they don’t have the slightest idea what is safe and what not. They won’t even – until they learn it from their friends – know that the penis is supposed to go into the vagina, and this mix of ignorance, myth and superstition, leavened with high doses of repression, is supposed to see them through to adulthood and marriage. Is this logical? Does it make sense?

I recall a letter published in a newspaper recently: “What is the use of sex education? We didn’t need it!”

Now alongside this avoidance of mention of menses goes another piece of weirdness. In  – where, as I mentioned, they still segregate menstruating women – the newly menstruating girl is felicitated and presented with new clothes and jewellery. This might sit oddly with the segregation that will be her lot afterwards. But if you think of it, there’s nothing odd about it. They’re just celebrating her arrival on the marriage market. That’s all it is, a market.

Oh, by the way, did I mention that they don’t give girls tampons? The hymen might be ruptured inserting one, after all…horrors!

As I said, if it isn’t a curse to begin with, at least they try and make it one.
Posted by Bill the Butcher at 05:32