An Exercise in Belief: The Loch Ness Monster

While I'm in no sense religious, I do understand that some minds require the presence of a deity or similar focus for their lives, if demonstrably false, because it gives them solace. Though usually weak, such minds should not be dismissed; they are, after all, what keeps the entire mythological-religious-spiritual farce going, whether it is garbage like Reiki or Feng Shui or that monster of illogic, the Catholic Church, or animal sacrifices in Hindu temples or Id.
One of the odder manifestations of this kind of illogic, and the pervasive desire to believe, against all odds, is the Loch Ness Monster. I'm sure anyone who's reading this will have already heard of this beast, so instead of going into a long and convoluted explanation I'll just do a brief recap:
There is, so the story goes, one or more gigantic monsters of an unknown species in a lake called Loch Ness in the Scottish highlands.  Ness is a long and deep lake, but so narrow that even on a cloudy day with poor visibility one can see clear across it. This is significant for purposes of observation. In any case, the monster is supposed to have been around at least since the time of St Columba in the sixth century, who is alleged to have saved (in 565 AD) a swimmer who was about to be eaten/bitten by the monster by shouting "Halt thou and think not to touch that man. Quick go back!" which promptly caused the monster, believe it or not, to submerge and disappear. After that there were a few garbled accounts of the monster emerging from the lake and smashing things up with his/her/its tail, but then only in the 1930s did the story suddenly gain prominence again with some characters claiming to have seen a monster walk across the road at night, briefly, in their car headlights. They did not stop for a closer look. (This is a recurrent feature. No one ever gets back for a closer look, and the researchers seem never to be able to get close enough for any look that would produce unambiguous evidence.) After that there was a sudden splurge of sightings, and tourist interest was already aroused (nowadays the Loch's economy is almost entirely tourism-, and hence monster-, driven, and includes stunts like this). Photographic evidence was produced, though what exactly those photos showed was wide open to interpretation...logs? Fish? Wave patterns? Otters?
The composite picture the monstereers (if I can coin a term) produced was of an animal, variously from six to twenty metres in length, resembling (though not necessarily being) a long-necked plesiosaur, but with bizarre features including
1. humps on the back, with variable numbers and forms. According to one researcher, the monster believer Tim Dinsdale, the humps could be seen to change shape and number as one watched (now I'd be inclined to believe that humps that changed numbers and shape would likely be no humps at all, but otters swimming in line, shadows on water, or logs, but then I'm a non-worshipper at this particular shrine)
2. an equine fringe at the back of the neck (I guess this was to reconcile stories of a crest with the plesiosaur hypothesis)
3. Rough, warty skin like that of a toad. I'll come back to this one later.
4. the ability to submerge vertically (to explain away abrupt disappearances of the "phenomenon" when viewers shifted position?)

OK.
In 1934 Dr. Robert Kenneth Wilson, a London physician,allegedly photographed a plesiosaur-like beast with a long neck emerging out of the murky waters.

That photo, on the left, created quite a fuss. Before the photo, Loch Ness was the stuff of legend and myth. The locals knew the ancient history of the sea serpent. But people came to the lake more to relax than to go on expeditions looking for mythical beasts. After the ph 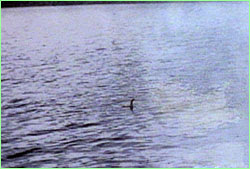 oto, the scientific experts were called in. First, they examined the photo itself. Could be a plesiosaur. Yes, but it could be a tree trunk, too. Or an otter. Dinsdale, in his book, The Loch Ness Monster, devotes an entire chapter to that photo, and "proves" it genuine to his own satisfaction (because wave patterns prove that there is something underwater behind that neck, which they do; but that does not necessarily prove, to any normal person, that that "something" is a monster's body). Unfortunately, the photo, shown in its entirety on the left and not in the cropped form as above, is fake, fake, fake. Christian Spurling, who died in the autumn of 1993, made a deathbed confession of his role in the prank. The fake photo was not taken by Wilson--his name was used to give the photo stature and integrity--but by Spurling's stepbrother, Ian Wetherell. Ian's father, Marmaduke Wetherell, had been hired by the London Daily Mail to find the monster. So he constructed a small model of a sea serpent made of plastic wood attached to a 35 cm toy submarine...
The little prank created such a huge fuss that the pranksters decided that the best thing for them to do would be to keep quiet. Poor Dinsdale. Unfortunately he died six years before the hoax was exposed, or else I'd have loved to have read his reaction.
And there are of course, deliberate hoaxers, like this one, not dupes like Dinsdale, who in 1960 took a grainy, indistinct, black and white 16mm film allegedly showing the monster's hump in the water. To an unprejudiced observer it resembles a small boat with a wake, but among monstereers it's an article of faith that it proves the existence of Nessie. Dinsdale himself was a true believer. Another weak mind.
Oh, for "heaven's" sake:
1. The story of Loch Ness' monster is riddled with contradictions. Sometimes it appears on land; yet it is, most of the time, a flippered creature which would have a difficult time on land. And when it appears (just occasionally) on land, it seems to be really mobile and is sometimes said to have claws.
Sometimes it has large and glittering eyes, and sometimes none.
It is shy, yet "St Columba" allegedly had to save a man from being eaten by it.
2. What is it? A mammal? Yet a mammal, being warm blooded, would have to
(a) Come up to breathe, and hence shown itself every day. Same problem with a reptile, such as the plesiosaurs probably were.
(b) Unlike reptiles, mammals need large quantities of food for temperature maintainence. The most optimistic estimates say the Loch can't support more than 30 tons of fish. So, if the monster is as huge as described, why has it not eaten the Loch empty by now? Also, taking a minimum breeding population of 10 monsters, and a maximum predator mass of 10% of prey mass, the monsters can't weigh more than 300 kg. NOT the giants of many tons.
A reptile? Besides the breathing problem I mentioned, a reptile or amphibian would not find life easy in the cold water. Most reptiles do not live that far north.
A huge invertebrate? A giant mollusc? A fish? I suggest they modify their shapes!
A plesiosaur? Plesiosaurs became extinct, as per fossil records, at the end of the Cretaceous, 65 million years ago. And Loch Ness formed just 10,000 years ago...and 15000 years ago it was buried under ice during the last ice age. And here is what Wikipedia has to say about plesiosaurs, which were not dinosaurs and this not even theoretically warm-blooded:
Contrary to many reconstructions of plesiosaurs, it would have been impossible for them to lift their head and long neck above the surface, in the 'swan-like' pose that is often shown. Even if they had been able to bend their necks upward, to that degree (they could not), gravity would have tipped their body forward and kept most of the heavy neck in the water.
3. What does it eat? if fishes are the prey, where are the numbers to support a breeding population? I assume no one says Nessie is immortal.
4. And where, for whatever's sake, are the corpses?
5. Why have serious sonar studies failed to show Nessie? If the idea is that there is a connection between Loch Ness and the sea, some tunnel through which Nessie only sometimes came to the Loch, one would need to ask how such a tunnel would be not just large enough for Nessie but also not so large as to empty the water of the lake because its outflow would be larger than inflow from the river!
Here is a site discussing hoaxes, some of which are still worshipped by the fan site here. And the famous "Flipper Photo", worked up to the skies by the "scientist" Dr Robert Rines, is taken apart here.
While I'm on this subject, here is a possible explanation for the original "Nessie" sightings, which would also tie in with the rough skin I mentioned: