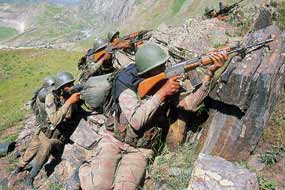 Among the more bizarre of the tendencies of Indians is the insistence on declaring that we’ve won all of our many wars since Independence; or at least all the wars against Pakistan.

Let’s take a look at these “victories.”

In 1947, on paper, we started off with all of the state of Jammu and Kashmir; the Maharaja of Kashmir signed over all of his state to India after Pakistani tribesmen invaded, not just the part left under his control. Yet when the fighting was over and a ceasefire signed, India was left with a shade over half the state. Is this a victory?

In 1961, we invaded the Portuguese colony of Goa and took it over within twenty four hours. The few Portuguese soldiers present, virtually unarmed and utterly isolated, laid down arms rather than offer suicidal resistance, yet the number of Indian casualties exceeded those of the Portuguese. I’d have liked to see how the Indian army of the time, malfunctioning radios, canvas gym shoes, World War One rifles and all, would have performed had the Portuguese put up serious resistance.

In 1962, following years of confrontation along the Himalayas, India sent a force into Chinese occupied territory (the Thag La ridge and Khinzemane) and unilaterally shifted the border northwards. The Chinese, who were waiting for some such provocation, invaded and in exactly a month captured all the territory they claimed. The Indian Army did not manage even to disrupt the Chinese timetable, let alone offer serious resistance. But to this day, although India can’t exactly pretend that it didn’t lose, it tries to save face by saying the Chinese did not advance further because of the strong Indian forces arrayed against them. Duh. Of course they didn’t advance any further – they had already achieved all their objectives. Why on earth would they want to advance any further?

In 1965, India and Pakistan fought over the Rann of Kutch – a swampy marshland – in the state of Gujarat. Indian troops, by and large, dropped their weapons, food, everything, and ran away, so that the Pakistanis didn’t even have any logistical problems – they ate Indian food and shot at Indian soldiers with captured Indian bullets. Not surprisingly, this little battle is not even mentioned in popular Indian history.

Later the same year, Pakistan sent saboteurs and raiders into Kashmir, followed by troops across the ceasefire line (which is not an international boundary). In response, India invaded Pakistan, sending an armoured thrust towards Lahore. This thrust could not even capture Lahore, just across the international border, and almost undefended, because the Pakistanis simply blew up a bridge across the Icchhogil Canal. In the meantime, the Pakistani Air Force virtually shot the Indian Air Force from the skies (as even the Indian Air Force belatedly admitted in a book published last year) and the Indian Navy stayed bottled up in harbour to avoid the risk of politically harmful sinkings. And then, when Pakistan was well on the way to running out of ammunition, India negotiated a settlement and returned all captured territory. And we still claim this was a victory.

India invaded East Pakistan on November 22, 1971, and after a brief campaign captured the territory (which nowadays is Bangladesh). On the ground, a military victory, because the Pakistani troops, demoralised and without air cover, were more keen on trying to save their skins than in fighting back. Fine. But – what did it achieve? We now had freed Pakistan of a genuine albatross round its neck, and given Pakistanis a new reason to hate India; we had inevitably pushed Pakistan towards Islamic radicalism; while Bangladesh, the new nation, began hating Indians and blaming India for its woes now that it no longer had the West Pakistanis to blame. Today Bangladesh is a more unstable and dangerous entity than East Pakistan had ever been.

Seen in a long term, is this a victory?

In 1987, India sent troops into Sri Lanka with the alleged agreement of the Sri Lankan government – alleged agreement, I say, because you could hear the Lankan sinews crack with all the arm twisting. That force, the Indian Peace Keeping Force, soon got stuck in a vicious guerrilla war against the Sri Lankan Tamil secessionist outfit, the Liberation Tigers of Tamil Eelam (LTTE) and after two years had to withdraw with its tail firmly tucked between its legs. The casualties were so enormous they have to this day never officially been divulged.  No wonder that this is another little war we studiously try and ignore.

In 1999, India fought an alleged war against Pakistan over Kargil in Kashmir. Normal diplomatic relations continued between the nations and the international borders were perfectly quiet, and it was basically a fight between a relatively small number of Pakistani soldiers on hilltops and in bunkers, supported by artillery but with no air cover, and a relatively very large number of Indian troops with artillery and aircraft. Even so, it was only after months of fighting that a negotiated settlement imposed by Washington brought the conflict to an end, and Pakistan still occupies an important mountain on the Indian side of the boundary. Again, I don’t know what sort of victory this is. At the very least, it made Washington a player in a bilateral dispute, a lever the Americans have never abandoned to this day.

Don’t get me wrong; I don’t support or advocate military conquest. But it’s also evident – or should be, anyway – that false claim of victories are dangerous simply because they make the likelihood of military adventures greater. A country that has the moral courage to admit its ass was soundly kicked on the battlefield is unlikely to want to repeat the experience unless it becomes absolutely necessary.

Naturally, however, in a nation like India, this is not going to happen, because there are too many reputations to defend and hagiographies to write. And after we lose, whether militarily or politically, the next little warlet (full scale wars are of course no longer possible) we’ll go through the same little mix of amnesia and rewriting history.

And after that, the next one as well.
Posted by Bill the Butcher at 04:19