This is the second part of my "running commentary" on the Bombay attacks, written on Day Two: 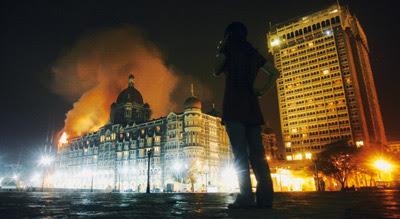 “Curiouser and curioser,” said Alice to herself.

Yesterday, when I posted the final lines of the previous post – “Sleep well” – I never quite imagined that, about fifteen hours later, I would still find the operation “to flush out of the dastardly terrorists” continuing. It does. It more than does.

Just take a look at things as they were yesterday, and as they are now:

We heard yesterday that the Taj hotel was cleared of terrorists. I just saw on TV that the “final assault” on the Taj is now under way...live coverage and all. What happened to the “terrorists” it had been cleared of? Did they fade into the wallpaper?

We heard yesterday that the terrorists were cornered in three or four places: a hospital (that seems to have dropped out of the news for some mysterious reason), Nariman House, where some Jews live; and two luxury hotels, the Taj and Trident/Oberoi. As of this morning I saw Indian commandos rappelling from Mi17 helicopters down on to Nariman House. What happened afterwards? Your guess is as good as mine. I just read the Trident/Oberoi is under control. The Taj – despite claims – is obviously not under control. And as for the hospital, it’s vanished into some news black hole.

We heard yesterday that nine terrorists had been killed and five or something like that arrested. Today, the number of arrested has dropped to one. What happened to the rest? Did they escape? Were they let go? Did they ever exist in the first place? Were innocents arrested and then let off?

It’s obvious that the terrorists have shown a much higher level of training, motivation and preparedness than the security personnel. If it were a tennis game they would probably be justified in claiming game, set and match. Because even if every one of them is killed now, they have still shown that they can take on the might of India’s vaunted military forces toe-to-toe. If it were a tennis match, I’d be rooting for the terrorists. Seriously. If they were actors in a film, they'd be the heroes.

Now let’s assume that the terrorists were Pakistani or at least Pakistan-trained/controlled jihadis. I can just, you know, see their Pakistani handlers sitting in front of banks of TV screens, watching Indian incompetence in 24x7 media glare, and plotting just how, next time round, they will take advantage of the lapses all over. If I were one of them, the next time I’d certainly hide small action teams near the sites of attacks with orders to do nothing, to draw no attention to themselves, until the media showed up, salivating at the prospect of news feed. Then I’d have them open up on the media. The best publicity ever. I was just thinking about this while watching TV journos lying prone on the ground and declaiming breathlessly on the “final assault” on the Taj. One terrorist with an AK could have done for all of them from behind with one good burst, and no great loss either.

If you want to know what I think, it’s this: apart from maybe one or two suicide volunteers, the rest of the terrorists have already quit these death traps, and vanished into the Mumbai slums. That’s what I would have done in their place. It wouldn’t have been too difficult. Just drop your weapon and merge into the people being “rescued”. After all, you’ve made your point, proved everything you set out to prove. Why wait to die, especially when the police and fire brigade will actually help you escape? If the army and Marine commandos find nobody to fight in the buildings they are attacking, they will most likely – both in order to stave off panic and because the politicians will want to show a return to normalcy as soon as possible – say they have killed terrorists there, and show a few corpses too. Anything is possible for an army which in Kashmir killed innocent civilians in order to meet quotas and in Assam posed villagers as “dead terrorists” with ketchup all over them because some officer wanted promotion. Hell, one time in Kashmir the Army made Indian soldiers pose as “dead Pakistani soldiers” in photos taken after a “firefight”. Anything’s fair in love and whatsit.

In the meantime, political games are in full swing. What did our (unelected) “prime minister” have to say? This: “We will not tolerate this act of aggression against our nation from neighbouring countries who will have to pay a cost.” What sort of cost? What’s he going to do, invade Pakistan? Pull the other one. And of course he condemned the “dastardly terrorists”. Sigh.

I assume that after this attack a lot of Hindu support will gravitate towards the Hindunazis in the next elections, and the incompetent right wing government we have will be replaced by a Nazi right wing government. This is also the profoundest wish of the jihadi groups.

Remember Osama bin Laden backed George W Bush and did all in his power to make him win a second term.

Meanwhile, I shall continue to believe nothing the authorities tell me, at all, at all.

(Oh, and before I post this; the latest news release is that there were just a dozen terrorists and three were captured. I remember nine being killed at the Taj alone. So who did the rest of the fighting? Ghosts?