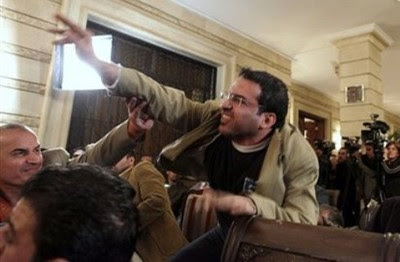 With the most profound and abject respect, I intend to encroach on your most valuable time and beg to distract your attention for just a moment from the terrible problems you face in running this country and in taking a tough stand against the terrible terrorists from the perfidious pigs of Pakistan. I am aware of how you, and Madam Sonia, are spending sleepless nights keeping us all safe. But, sir, just a moment of your time.

I am sure that you, sir, will have heard of the shameful, inexcusable assault on His Excellency President George W Bush, whom, as you know, the people of India deeply love. Sir, in order to refresh your memory, a traitorous and ungrateful Iraqi journalist – one of the same religion as the minority community in this country, who, as you well know, are all Pakistani agents – threw his shoes at the Beloved Bush, his country’s liberator, at a press conference in Baghdad. We should be profoundly grateful to God, in whatever form we pray to Him, that the stinking ingrate’s no doubt stinking footwear missed the Beloved Bush. And to further compound his sin, the traitorous ingrate compared the Beloved Bush to a dog – a common cur of the streets, if you please!

While the said ingrate is in custody and will hopefully be hanged like his Al Qaeda–hobnobbing, WMD-hiding ex-leader Saddam Hussein, I would like to remind you of the very real dangers this poses to us.

Sir, if you remember, this country is riddled by  traitors – communists, Maoists, pinkos, Reds, Chinese agents, all determined to discredit the wonderful things you have done for the economy and for the people of this country. Sir, these are people who have linked up with the minority community to pull us all down, and are everywhere. There are several of them who have infiltrated the media, too. Just imagine if one of them were to do the same as this Iraqi criminal if the Beloved comes here. Or even worse, just imagine if one of them were to throw his shoes at you, sir, while you were talking about the 10% growth rate! For some reason this talk of the glorious 10% growth rate of our economy under your stewardship always brings out the worst in those communist criminals.

In fact, sir, it might be even worse. Suppose the criminal involved were a woman wearing spike heels. I do not think, sir, that you would like a spike heel in the face. It would be even worse than a stinking boot. It might even do very major damage. How tragic!

I am sure, though, that you would not like to dispense with press conferences, especially with elections coming. Your opponents will take this opportunity of claiming that you are ducking the media. But we cannot risk you – and the 10% growth rate. How tragic for the growth rate if something were to hit you in the face while you were expounding on it!

So – sir – I suggest that from now on, all media persons who interview you or are present at press conferences must have their footwear removed beforehand. After all, they remove their shoes at the entrance of temples and mosques. You, Sir, are the deity of the Temple of the Growth Rate. If they have problems with attending your press conferences in socks or barefoot, we can assume that they are not just potential shoe-throwers but are disrespectful of the Growth Rate. We can then arrest them and throw away the key.

In the meantime, Sir, I suggest you call the Beloved Bush and assure him that the people of India all still deeply love him, more in fact than ever before.

Yours in abject prostration 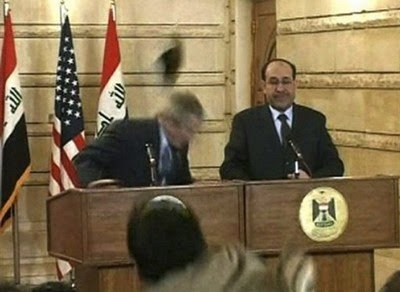