This is the country which calls Mohandas Karamchand "Mahatma" Gandhi the "father of the nation" and plasters his face over each currency note. This is the country which pretends to worship non-violence, and in the shape of pop film Gandhi-ism as well. This is also the country with the world's third largest standing army, an army which uses (and has used for almost half a century, without any discernible success) one of the worst, most brutal, and most indefensible piece of legislations ever imposed on a portion of an allegedly democratic polity.
That legislation is the Armed Forces Special Powers Act of 1958, under which Manipur (in which up to 20 armed groups are "fighting for freedom" at any given moment) is called a "disturbed area" and where all the armed forces (including paramilitary organisations) have been given the power - which they have most freely used - to
carry out their operations, once an area is declared disturbed. Even a non-commissioned officer is granted the right to shoot to kill based on mere suspicion that it is necessary to do so in order to "maintain the public order".

The AFSPA gives the armed forces wide powers to shoot, arrest and search, all in the name of "aiding civil power." It was first applied to the North Eastern states of Assam and Manipur and was amended in 1972 to extend to all the seven states in the north- eastern region of India. They are Assam, Manipur, Tripura, Meghalaya, Arunachal Pradesh, Mizoram and Nagaland, also known as the "seven sisters". The enforcement of the AFSPA has resulted in innumerable incidents of arbitrary detention, torture, rape, and looting by security personnel. This legislation is sought to be justified by the Government of India, on the plea that it is required to stop the North East states from seceding from the Indian Union. (Source: http://www.hrdc.net/sahrdc/resources/armed_forces.htm)
Quite apart from the question of whether there is any possible justification for large scale annihilation of people to force them to be a part of a political unit they wish to leave (and on this I'd just mention that the people who constantly go on about the world being a global village are also those who are always the most raving opponents of letting go of even one square millimetre of territory, no matter how valueless) is the precise point that this legislation has solved nothing. It has, in its half century of existence, seen secessionist  activity in NE India grow from just the Nagas to an extent where not a single state (not even Arunachal Pradesh) is free of some form of insurgency. The Act also
contravenes both Indian and International law standards. This was exemplified when India presented its second periodic report to the United Nations Human Rights Committee in 1991. Members of the UNHRC asked numerous questions about the validity of the AFSPA, questioning how the AFSPA could be deemed constitutional under Indian law and how it could be justified in light of Article 4 of the ICCPR. The Attorney General of India relied on the sole argument that the AFSPA is a necessary measure to prevent the secession of the North Eastern states. He said that a response to this agitation for secession in the North East had to be done on a "war footing." He argued that the Indian Constitution, in Article 355, made it the duty of the Central Government to protect the states from internal disturbance, and that there is no duty under international law to allow secession.
This reasoning exemplifies the vicious cycle which has been instituted in the North East due to the AFSPA. The use of the AFSPA pushes the demand for more autonomy, giving the peoples of the North East more reason to want to secede from a state which enacts such powers and the agitation which ensues continues to justify the use of the AFSPA from the point of view of the Indian Government (ibid)
This is precisely the point. It just arouses more resentment (and I can assure you that the armed forces' arrogance has caused them to be deeply and truly hated even in peaceful parts of the North East, like Meghalaya), more violence, and more repressive measures from a gaggle of politicians in Delhi who would be hard put to locate Manipur on the map, let alone give a damn about who lives or dies there.
The AFSPA is also in definite contravention of the Indian Constitution - instead of pasting more pages of information, I would recommend, again, a careful perusal of a detailed study of its unconstitutionality here.
Not that it matters to the people of "mainland" India who if they think of the North East at all, think of its people as head hunting jungle savages who need an iron hand to drag them to civilisation and light. Nor does the AFSPA affect them, no matter how much it might make the POTA and TADA they either love or hate look like benign legislation. The politicians of the North East are also easily co-opted. All opposition is up to informal groups and to individuals of the likes of Irom Sharmila Chanu. 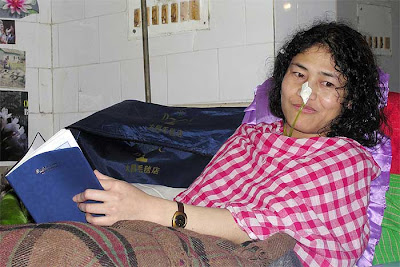 So, who is Irom Sharmila Chanu?

On Thursday, November 2, 2000 a convoy of Assam Rifles was ambushed by insurgents near Malom in Manipur. In retaliation the paramilitary personnel ran amok and murdered 10 civilians - which was pretty much par for the course for Manipur. It had happened many times before. Unfortunately for the Assam Rifles, though, one woman who witnessed it was pushed beyond the margin of tolerance. That woman was a then 29 year old called Sharmila. She promptly went on a fast unto death until the AFSPA was withdrawn from Manipur, and to this day, over six years later, has not even taken so much as water. She is being kept alive by being  force-fed through a nasogastric tube - in hospital, where she is most of the time, and in jail where she is confined the rest of the time on the charge of "attempted suicide" (another brilliant Indian law that makes suicide illegal - brilliant since success would put the criminal beyond reach of punishment).
During her fast, Sharmila has even deprived herself of the company of her mother, since she is afraid the lady will not have the moral strength to see her daughter in that state. She has repeatedly declined blandishments including offers of a seat in the Manipur State Legislature in order to end her fast.
Of course the Indian Army does not want the Act lifted. When did any armed force want to give up the right to be able to harrass and murder civilians at will, anyway? The odd thing is, no one challenges it to prove how things have improved after twenty six unending years of imposition of the act in Manipur.
Meanwhile...
In June 2004, a young Manipuri woman called Thangjam Manorama Devi was abducted, raped and murdered  by Assam Rifles personnel on the pretext of being a member of a militant organisation. Massive protests, which faced violent suppression and the public stripping at the gates of Kangla Fort (then the Assam Rifles' headquarters in Manipur) by members of the womens' organisation Apunba Lup, followed. Ultimately  -  and with extreme reluctance - AFSPA was withdrawn from Imphal, and Imphal only, yet it continues to be imposed on the rest of the state. And the situation is no better.
On October 4, 2006, Irom Sharmila reached Delhi and promptly continued her fast at Jantar Mantar. On the night of 7 October, she was arrested and taken to hospital. There she remains under police custody, even though the hospital authorities say she is fit to be discharged. After all, she will certainly immediately resume her fast unto death in public, and in Delhi, especially with the tourist season just beginning, it is not going to be as easy suppressing facts as it is in faraway Manipur.
Meanwhile, again, all the lessons learned from this is that only violence is liable to catch the eye of authority.
And that is the position of "Gandhigiri" (Gandhism) in India today.