Fight corruption! Wipe it out! Stamp its face in! Cough cough. 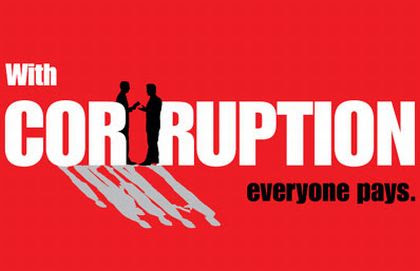 When did you last pay some kind of a bribe, or seen or heard of one being paid? Even if it was called something else? Oh...like a bailout, for instance?

We all know, do we not, that corruption is a worldwide problem. Some nations, like Finland and New Zealand, have very little of it; some, like India or Russia, have large amounts of it; and some, like Bangladesh or Afghanistan, have such extreme amounts of it that it’s become virtually synonymous with those nations – but no country is entirely free of it.

No, if we have to beat corruption, we’ve got to think slightly more innovatively than that...

See here, corruption is a crime, right?  So how do we remove all traces of it from the crime statistics? Simple –  declare that corruption is no longer a crime.
It’s the perfect solution!

Look what advantages it gets us: first, the police forces can concentrate on muggers and murderers and drunk drivers and the like and leave corruption strictly alone (apart from their own little bit of it, of course). Then the government can also declare proudly that the crime statistics have dropped drastically. That should help in the elections.

Then, you know these are economically straitened times. If you legalise corruption, you’ll open the way to competitive bribery; and in a competition, as we all know from economic theory, the competitors undercut each other, so if you open the door to competitive bribery, the actual bribes payable will drop. Isn’t that cool?

Also, I don’t actually advocate people paying their bribes directly. Oh no. That’s so inelegant. Besides, it’s a lot of trouble to take, to handle the negotiations, and so on. No, what I suggest is the establishment of professional bribery firms with offices in every neighbourhood. Call them what you will...how does “lobbying firms” sound? Anyway, what you’ve got here is yet another benefit of this show – the creation of more jobs, in a shrinking job market – because, of course, these lobbying firms will employ receptionists, negotiators, web designers, financial planners, and so on, not to speak of side employment for builders and caterers and the rest. Am I right? Of course I am!

So how would these firms work? Here’s how: Suppose you want to get permission for constructing a building on land you’ve bought. This is something that cannot normally be done (in India, at least) without paying a bribe. So you go to a lobbying firm and pay the fee they ask, up front, and get a proper receipt. The lobbying firm then handles the negotiations, forks over the bribe and gets you your permit. It keeps the excess from what you paid as its fee. That way it’s in its interests to keep the bribe as low as possible – to maximise its own profit. As for you, apart from the initial fee, you pay nothing else.

Oh, I can hear the objections. First: but isn’t the idea anti-poor? Answer: Not at all. The poor are already paying bribes, often for services, like basic medical care and police protection, that the rich take for granted. This way, they regulate and standardise the amount they pay. Besides, the amount of the bribe depends on the service. I doubt someone who lives on the equivalent of a dollar a day will be applying for permission to set up a steel rolling mill. So there.

Second objection: Won’t the lobbying firms just make money out of people, taking high fees to pay low bribes? Answer: Who ever said lobbying firms can’t compete for business? And the same laws of competition apply, so they will undercut each other as much as they can. And think about the ad revenues the TV channels and magazines will get from them!

I think I have a winner here. That’s how many birds with one stone?

A whole bunch of them.